If the last lesson was all about representing queries in our application (“please give me this data”) this one is all about issuing commands.

The obvious command for us to build first is one for posting new tweets.

But, hold your horses, you may have noticed we don’t actually have a “store” for our tweets yet; the query we added last time just returns hardcoded data.

We could go ahead and bring in an actual database at this point, maybe utilising something like EF Core to interact, but our focus is to figure out how to model commands and queries, and hook them up to a front end (Blazor in this case) so we’ll take a pragmatic approach and use a fake “in memory” data store so we can keep moving forward.

To create a fake data store for tweets we really just need to hold a collection of them in memory somewhere. We can then read from, and add to this collection and it will act as a proxy for a real database at some point down the line.

Add this Store.cs class somewhere in your application (the Data folder looks like as good a place as any).

So this is really just a model (Tweet) and a collection to store Tweets in. This class also exposes a method for adding a new tweet.

If you’ve used Entity Framework Core you’ll be familiar with the DbContext. This Store class is essentially our pretend DBContext and is merely here to give us somewhere to “store” our tweets.

Add the following to ConfigureServices in Startup.cs.

With this in place, our application will hold one instance of this Store and forward all requests to it. This will suffice for testing our application but it’s worth reiterating; you’d want to swap this out for a real database for anything that’s actually going to be used by real people!

Update List.cs to fetch from the new store

We have a store but we’re still retrieving hardcoded tweets at the moment when we run our List query. Let’s switch that over to use the new store.

Note you’ll need to add a couple of new using statements as well:

We’ve used ASP.NET Core’s dependency injection to bring in our Tweet store and mapped the Contents of each tweet into our Model (which, if you recall is simply a list of strings).

It’s all in the command

Realistically this will take in the tweet contents, then add it to our store. Unlike Queries, Commands don’t necessarily return in a response. 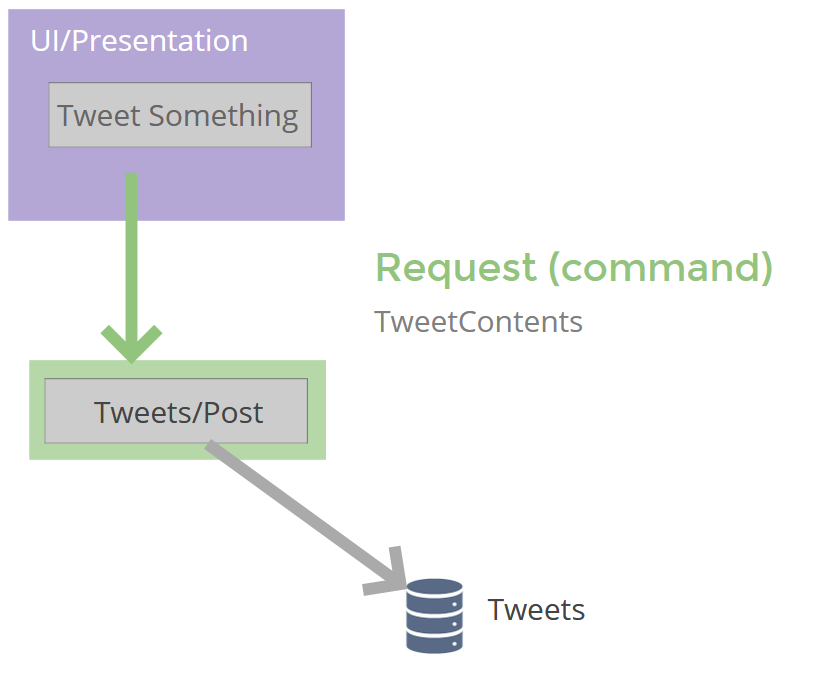 Add a Post.cs class to Features/Tweets and replace the contents with this…

This is our command. All we need (for now) are the contents of the tweet itself.

Now we can add a handler, just below the Command class (but still nested inside the Post class).

A little bit of UI goes a long way

Now we just need to “hook this up” to the front end.

Blazor has a few tricks up its sleeve for posting data…

Head over to the Pages/Tweets/ folder and add a new Razor Component called PostNew.razor.

Replace its contents with the following…

Aside from a little Bootstrap, we’re using a Blazor control called EditForm and binding it to a new instance of our Post.Command (the command we added a moment ago).

It is entirely possible to use a standard HTML form element here but EditForm gives us some bonus functionality; not least built in support for validation.

With our form in place we can bind a text area (using Blazor’s InputTextArea in this case) to the Contents property on our command.

Now, whenever we type something into the text area, the command’s Contents property will be updated based on what we typed in.

Finally, when the form is submitted it will invoke our HandleSubmit method which calls MediatR to “send” our command.

Our CommandHandler will then kick in and add a new tweet to the “store” we created earlier.

So we have a PostNew component but we’re not showing it anywhere (yet).

You can show this component wherever you want but for now I’ll add it to List.razor.

With this in place launch your application in the browser and try posting a new tweet. The tweet should be added to our store; refresh the page to see it appear in the list of tweets!

Nearly there, but that last step (refreshing to see the new tweet) feels a little, well, clunky…

A better option would be to trigger a refresh of the tweets when a new one is posted.

What’s in a callback

Blazor has a handy concept called callbacks for exactly this kind of requirement.

We can update PostNew to invoke a callback when we’ve finished saving the new tweet.

Head over to PostNew.razor and update your @code block to look like this:

Now, when we post a new tweet, after we actually “save” the tweet we invoke our OnPosted callback. EventCallbacks require an argument, but in this case we’re just using it to signal that something has happened so can pass EventArgs.Empty as the argument.

Now we can use this callback in our List component to run our tweets query again, and update itself accordingly…

First up I’ve extracted the little bit of code needed to retrieve our list of tweets into its own method. This way we can still call it from OnInitializedAsync but also call it any other time we need to.

Then I’ve wired up the OnPosted callback from our PostNew component to also call LoadTweets.

So there it is.

You now have a handy mechanism to model your application as a serious of queries and commands, leaving you free to bolt on whichever UI framework comes along without making major changes to your application.

I’ve used this approach on several large projects and the good news is this scales; so no matter how complex or large your application becomes, you can nearly always break it down into a number of commands and queries, modelling them as we’ve done here.

If you’re wondering where to go next. Here are a couple of ideas for next steps…

As you approach these and subsequent tasks, just remember to keep all your business logic in the MediatR commands and queries. Keep the UI as dumb as possible and you’ll be well on your way to building an application which adapts and scales as new requirements come in.